The Day Draws Near


As if things weren’t scary and serious enough, here comes Friday, January 20, 2017. I’ve recently posted humor pieces, and although I amused myself in the process of writing those posts, it was merely another excuse by me to avoid addressing Donald Trump’s upcoming presidency.  How can it be? That those words can now be strung together? President Donald Trump?

One of his many faces

I was raised on the 1960s ideology of equal rights and peace. Love flowed, yet there was violence, too, brought about by anger and the desire to draw attention to the many injustices that prevailed. There were the Chicago 8, Black Panthers, Gloria Steinheim, Betty Friedan and the rest of them. And there was me, a micro within the macro of middle-class teen women, who wore ragged jeans and attended local protests and rock concerts. As far as I was concerned, our entire life theme, down to our civics class discussions and our music, was meant to foster racial equality and promote peace in an era where we watched our friends depart for Vietnam where they might die, or return so messed up in the head, they were never the same again. We wanted the country and the world to be better. One of my favorite words has always been “possible.” To this day, I don’t know if I’d be able to go on if I didn’t believe in the meaning of that word. Of course, I guess that depends on what one hopes is possible; surely that point can be argued, and as we have witnessed, there’s plenty of arguing happening these days. 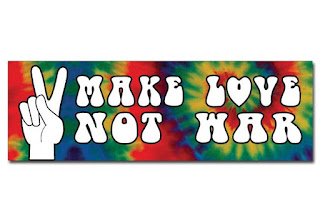 I’ve commented on right-wing blogs and posts. I followed them because I felt it important to inform myself about what others, who don’t share my political stance, believe. When I comment, I am careful to choose my words so that I respectfully make my point. The kindest response I have received was a condescending “pray for her.”

I remain polite when I comment, I don’t believe in name-calling, and for that I was labeled passive-aggressive. It’s not like I need to always be right, or to win the conversation, but refuting every single negation of rational, loving, caring philosophies that serve all people, is exhausting. Dang, and I always thought it was so easy to live the golden rule - silly me.

The words, openness and tolerance, seem to have lost their meaning within the context of this particular political conversation to which I refer.  My experience in right-wing arenas, renders the words laughable. How and why did we stop caring about all human beings to the point these folks believe that only people like themselves are the norm, or deserve consideration?  Transsexuals are deemed psychologically unsound.  Black Lives Matter and White Privilege are titles that so many on the right believe negate their own place in the world, and there seems to be no effort to understand why others, who are somehow "different," feel their lives and needs have been ignored and disrespected.  Or perhaps I don’t need to ask how and why we stopped caring. Because, apparently, some of us never cared in the first place.

The issues are more complex than my ability to discuss here, but as the week wanes, and I approach my personal Media Blackout Day, a/k/a Inauguration Day, I offer kindness and condolences to everyone who feels like me, the girl from the 1960s, who still believes in the possible.
Posted by Eileen Brunetto at 8:02 AM