His hippie-style beard was what caught my eye. He looked as if he strummed guitar for a living, or was on the verge of opening his own health-food store. Each morning on my way to work, this stranger passed by me in his green-and-white Volkswagen bus.
I was twenty years old.
The first time I waved, I gave a Native American “how." The next day and from then on, we waved as if we were engaged in a modern version of a primal dance. My secret boyfriend. 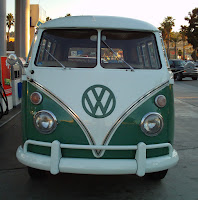 As a Talbot’s/worn-out-jeans-wearing hybrid, I often felt torn between convention and rebellion. I was a legal secretary in a historic building surrounded by cobblestones and old-growth maple trees, yet I loved my progressive rock musicians and blasted their albums whenever I could. I aligned more with the bra burners than prim college girls, who wore matching sweater sets. I appreciated a person who showed up every day; but I was an idealist to my core.
One morning, as our cars passed each other, my friend, instead of waving, turned his vehicle in a wide arch and began to follow me. Oh, brother, I thought, I asked for it, didn’t I?
I pretended I didn’t notice, stealing glances of him in my rearview as he escorted me all the way to the Stafford post office, where I picked up the office mail.
I pulled into a spot in the post office parking lot, and he turned in next to me. A total klutz, I summoned all the gracefulness I could muster as I stepped out of my Chevy sedan. It was time to make a good impression now that I was face-to-face with my hippie.
I couldn’t help but smile as he extended his hand. “I’m Fred,” he said, grinning.  “I’ve never known anyone so forward she’d wave hi to a stranger. Whatever made you do that?” he asked.
A head taller than I, tattered jeans hung on his lean frame.  He wore a light Army-surplus jacket. Then, he leaned back against his van.
I introduced myself to Fred. We talked about our morning drive, where we had gone to school, and what we’d eaten for breakfast. I had an English muffin. He had Cheerios; he crinkled his nose and said, “Yeah, I eat them every day, but they have a weird aftertaste, don’t you think?”
“You don’t wear gloves. Aren’t your fingers freezing?” he exclaimed.
So he had been noticing—down to the tips of my fingers.
He asked me where I worked. I nodded toward Kings Highway, where the prestigious law office was located. He worked at the Landford Animal Shelter. I typed all day; he took care of animals. I felt an urge to apologize for my ordinariness. Secretly, I thought myself a free spirit despite the fact my livelihood was ruled by daily commerce. Not to mention I was engaged to a young man I had known in high school—a telephone lineman, hunter, fisherman, and not exactly a devoted animal lover since it didn’t matter much to him if he shot a deer with his bow and arrow. He was more concerned with getting the deer.
Nevertheless, I was impressed by Fred’s line of work. He takes care of animals, I sighed, so he must be a good person.
*****
As a high school girl, I fantasized about my future. I would live in New York City in a Greenwich Village walk-up flat with creaky wooden floors and thick-paned windows. I would decorate with antiques, hand-me-downs, and soft colors. I would meet and fall in love with a Paul Simon–type, someone who was sensitive and had a passion for life and the arts—cute but not too cute. We would walk the park each afternoon, and I’d accompany him on his music dates where I’d watch and listen from a table way in the back. Afterward, we would return to my place where we would talk and make love late into the night.
*****
Fred seemed as if he might fit into my fantasy. What didn’t fit was me, flirting with him despite my recent engagement.
If only my girlfriends could have seen me in that parking lot, they’d have had a fit. “You’re engaged for God’s sake! How could you?” they’d cry. I could just see them shaking their heads and clucking their tongues as if I was the worst sort of Jezebel.
I could have talked to Fred all day, but I needed to get to work. I wrote my phone number on a scrap of paper and stuffed it into his hand. I arrived at work and dropped my bundle of letters on the mail table, cheeks flushed as I tore off my coat and began sorting the mail. I thought of Fred and hoped I would see him again.
*****
A few mornings later when I arrived at the post office, Fred was waiting for me by his van. The back hatch was open, where his Saint Bernard, Wiley, filled the back of the vehicle. Both dog and man greeted me. I petted Wiley as he slobbered onto my jacket, but I didn’t mind. Fred seemed so proud to introduce me to “the family.” I didn’t know what Fred had in mind, but I was glad he had returned. What if he asks me out? I probably shouldn’t be talking to him. But do I care? I’m not sure.

Fred grew quiet. He gazed down at my hands. Then he tapped the diamond on the ring of my left hand with his index finger.
“I didn’t see this before. I guess we shouldn’t see each other, should we?”
Please come see me again. I heard the words in my head, but they didn’t come. Instead, I stood there for what seemed like fifteen minutes, the same amount of time as our first meeting.
I wished I could travel back in time to the day I had gotten engaged. Part of me wanted to undo the ring, the guy, the married life I was headed into. But this was just a silly notion, right?
Fred, my fork in the road; my spirit guide. It took me years before I understood that the young girl, the one who waved to strangers, had always been free to choose.


Posted by Eileen Brunetto at 8:10 AM No comments: