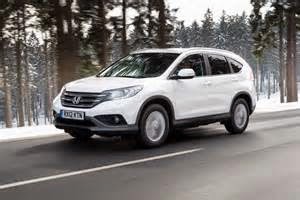 What is it lately with me and cops? Yesterday afternoon, cruising at my usual self-restrained six miles over the speed limit, I passed a State police cruiser as we dipped at the hollow on River Road. I cringed. "Ugh, cop, oh no." I've been programmed, I can't help it. I have a long history of police wariness. You'd think, as a citizen, I'd be grateful for their service, and I have felt that way - at times. I am fully aware that police help many people, every day, in this country.

But my personal experience with cops has been tenuous, at best. There are not many more things that get my adrenaline going than seeing the blue lights flashing behind me. What did I do? Was I speeding? I hadn't meant to. I don't think I was. Wasn't I only going 40 miles per hour in a 35 MPH zone?  (Is that grounds for a $185 ticket? I think not.)

When I lived in the country in New Jersey, I stayed home with my baby every day, so when the neighbor's alarm system went off, I quickly dialed 911. The police responded in moments.  I felt safe as they stood at my front door; we assumed there had been a short in the alarm system, and the situation had checked out fine. All of a sudden, the younger cop became visibly upset and shouted, "your baby is bleeding!"  "Beets," I said calmly.  She had been eating lunch, and because she was not even one year old, she wore, as happens with most babies, some of her meal.  That was the one and only pleasant exchange I had ever had with a cop.

Then there was the time I was driving home from work at mid-day. As I approached the intersection that led directly home, I saw my road had been blocked. Stymied, I hesitated and looked toward the policeman hoping for a suggested alternate route, but stopping was my first mistake.  Face contorted, pounding on my window, this guy looked as if his head might explode. He assumed I had power windows. Which I did not. When I couldn't open the window, he ran toward my side of the car and kept the mean streak going, all close and personal-like until I shrank away, said I was sorry and figured out my own way home.  All of the minor interludes and scrapes I had experienced over the years, such as speeding or getting stopped in Berlin  Park for parking, flooded my senses, only multiply that fear by 100. I wondered where on earth did all of that rage come from? 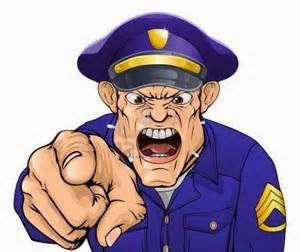 It has always been easy for me to imagine the news scenarios where cops have bullied, abused and beaten "perpetrators." It's a no-contest issue for me. Of course, they're mean. Of course, they are capable of violence. And I'm not going to take this any further because my first-hand experience is, after all, quite limited in the scheme of what has been happening in our country. I only know that human beings, police included, carry many and varied human traits - everything from kindness and patience to disrespect and fury.  But I will say that perhaps police (in general) might benefit from further instruction in basic social skills and counseling on an ongoing basis. Their jobs aren't easy, but it's not easy being an unsuspecting citizen when they decide to unleash, either. 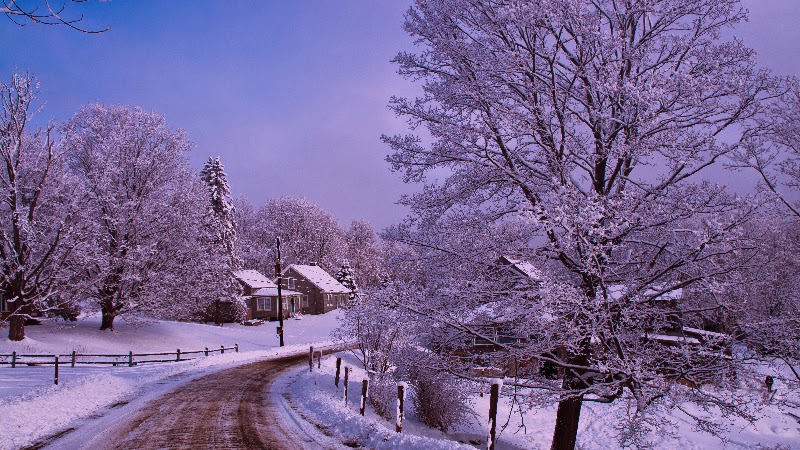 As for yesterday afternoon, the young State policeman who pulled me over, regarded me kindly.  He was nothing but respectful. He asked me if I knew why I had been stopped. I didn't, so I was honest and said so.  He pointed to my expired inspection sticker. I offered no excuse, except that when he asked me if my husband usually took care of those things, I admitted yes, but my husband's retired, off the calendar, so to speak, blah, blah... so yes, maybe I did try to excuse myself, but he didn't shut me down; instead, he smiled. He walked back to his car to check my license and registration. While he did so, I looked at the trees and sky and breathed in the fresh Vermont winter air. He issued a warning because "It's not the crime of the century."  I could have said "no duh," but I had no reason to go smart-ass on him. State Police Officer Friendly was a sweetheart, at least he was to me on this occasion. And I couldn't help but do the math. I was probably old enough to be his grandma.
Posted by Eileen Brunetto at 7:58 AM 2 comments:

Easy on the Ice

Icy road alerts on the news were enough to get me going.  I don't "do" ice. I am the perfect example of gravity. The moment I place my toes on any slick surface, I spin like a top and go down. 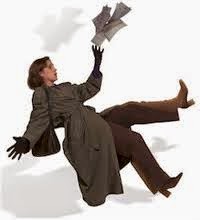 Whoaaaa! This could be you (or me) if you're not careful.

I left for work a bit later the next morning to be safe and though the roads were treacherous (the newscasters' favorite descriptive word for bad road conditions,) I arrived at work intact. A colleague had messaged me and warned that the roads weren't too bad, but she had trouble navigating the parking lot. "It's a mess, so be careful!"

Harkening back to a morning years ago, I arrived in our ice-covered parking lot at 8 a.m. A bed of ice had been layered with new moisture that can only be described as gelatinous slime. How would I ever make it into the building? With a lump in my throat, I phoned my colleague, then sat behind the wheel, frozen in time. My friend emailed my faculty, "Eileen is in the parking lot." Finally one of them came out for the rescue just as the ice became a bit more traversable.

On this morning, I thought, why not be efficient? I'll reach out to my employer's public safety department. A good idea, right? I explained I couldn't walk the ice. "Could an officer come out and drive me to the building?" I begged. The dispatcher was like, "huh?"  I was tempted to share my age with hopes of persuasion, but I had already sufficiently self-humiliated. 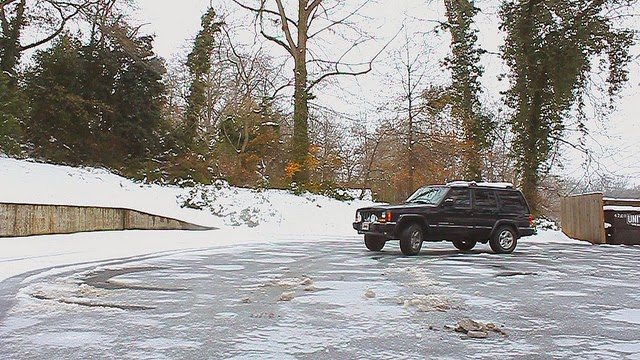 When the officer arrived, he parked next to my vehicle. "Wait a minute," I told him, aren't you going to drive me? " The officer, we'll call him " Officer Dan," informed that public safety is not permitted to transport faculty or staff, only students.

I knew Officer Dan. I'd met up with him on several occasions before. He has yelled at me for 1) not having an updated parking sticker and 2) illegal parking (but I had permission! I did!)  I had always thought of him as a mean guy and a bully. So, naturally, I hated him. Ever since I was 18 years old and had my first experience being pulled over by the town cop because he thought I looked too "short" to be driving, I've had a hate/hate affair with police, and agreed with the "Cops are Pigs" slogan popular during those years.

But Officer Dan listened to my laments about the icy lot. He extended his arm, and I had no choice but to latch on. Up the steps we walked like a winter-worn couple, he in his dark Carhartt-like jacket, me in my scruffy Uggs. Mortified, I had been reduced to relying on a walking/talking/breathing college public safety officer to help me to my destination.  Interesting, the steps and walkway weren't as icy as I had imagined. And Officer Dan was gentle and polite. He made a joke about us both falling and him landing on me, and yeah, that's always a pretty amusing scenario. He didn't let go until we reached the large front doors of Bicentennial Hall.  I had stopped worrying whether any of my friends - if ANYONE - had seen me holding onto a cop with all my might. Have a nice day, Officer Dan. 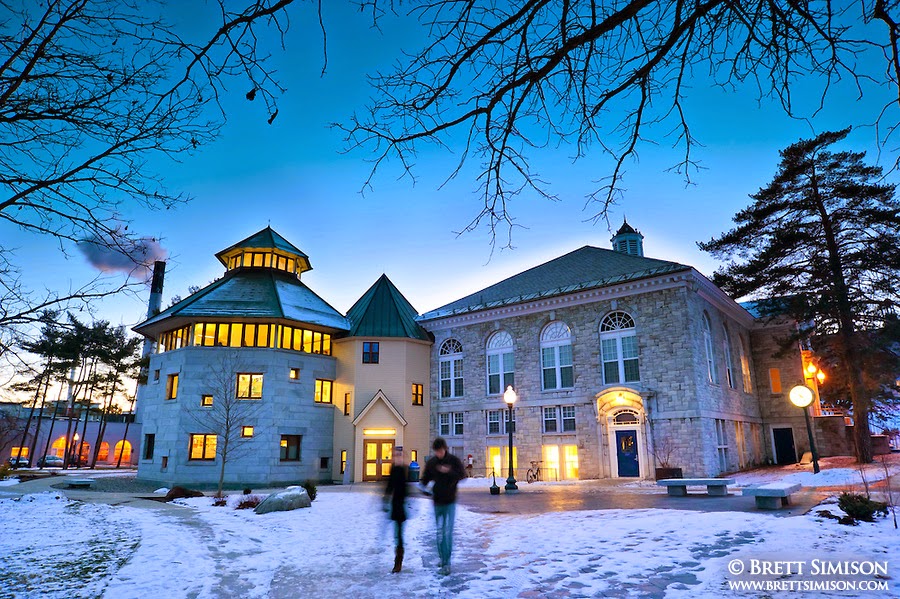 Ice Doesn't Seem to Scare Students
Posted by Eileen Brunetto at 6:47 AM 1 comment: