In my twenties and thirties, my friends and I talked about the various ways we cooked spaghetti sauce. Although we lived in an area of South Jersey populated predominantly with people of Italian descent, many of us were of Celtic background, blue-eyed and beyond the pale. We had no intimate knowledge of sauce (a/k/a gravy.)  But as young wives and mothers and because we were so amicably settled amongst our Italian friends and neighbors, sauce became a rite of passage.

When it came to good food, I gave a nod (and still do) to the Italians; creating good sauce was a way to become honorary "familia locale'". 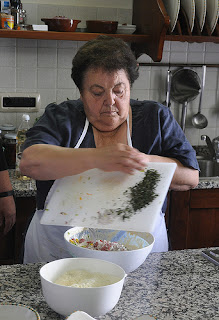 an unknown, but real Italian mama.
Borrowed from foodloversodyssey

My friend, Michele, stood at her stove while I sat at her kitchen table. Curious about her sauce recipe, I asked her to reel off the ingredients.  "I use only pureed tomatoes," said Michele. Yes, yes! I thought. I prefer those, too. "Then, I add a small can, or maybe two, of paste." "Garlic, of course." Do you saute it, or just throw it in? Onion? "Yep, a little." Do you fry your meatballs or carmelize them in the oven? My mother-in-law placed them directly in the sauce. I made them that way for years because I admired her cooking. And my meatballs were popular, but my audience was more a meat and potatoes crowd, so my Italian offerings probably would have been a hit if I'd browned a packet of ground beef and added Ragu.  I've since learned that plunking the meatballs into sauce to cook is blasphemy, according to my husband and his mama, a natural Sicilian cook.

As a novitiate to meatball-making, I used ground beef only.  I soon learned that a respectable meatball requires a combination of beef, pork and veal, or at least beef and pork, which provided way more flavor.  Michele turned to me and said, "I only put cheese in the meatballs, not in the sauce."  She seemed proud, as if she had made a decision on her own, a process that arose from trust in her own taste buds and preferences - what worked for her.

I now live in Vermont where good Italian food is not readily available, but there are a few places that dedicate their menus and kitchens to meals as authentic as possible. Burrata (a type of mozzarella) is sourced from milk obtained from local dairies. The beef and pork used in ragu' comes from cows and pigs who graze on local farmland. Vermont delis are not capable of offering a single dish that compares to Philly eggplant parm sandwich, but in Vermont, we try. We start with fresh food; it seems a good path to follow. New generations come with new attitudes. Trust in old methods melds with the progressive for cooking is art. We admire an original, but there is always space for exploration. 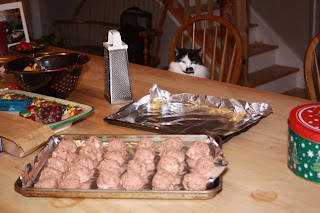 My cat, Bessi, waiting for a taste (no garlic or onion for cats.)

My husband now makes the sauce in the family.  In a future post, perhaps he'll let me share his recipe. But back in 1980, I learned from a friend. I experimented and tried out new things. I combined my preferences with a friend's sensibilities, plus a little help from an Italian friend or two.
Posted by Eileen Brunetto at 1:19 PM No comments: 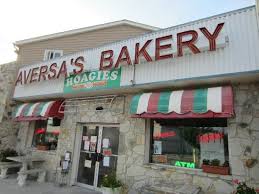 When I visit Jersey, I always stop here.

The clerks at the Jersey deli’s where I bought hoagies, cheesesteaks and take-out lasagna would  never miss an opportunity to correct my pronunciation. There’d be a little snicker, a sympathetic nod toward my lack of Sicilian suave as I asked for a half pound of provolone cheese. I wasn’t a student of the Italian language, but I’d always heard that it was proper to pronounce every vowel.  “A half pound of provolon-eh, please.”  The reply echoed across  the deli counter, which was usually higher than my head like a mountain I would never scale,  “That’s a half pound of provalon, miss?  You got it!”  The Modern Italian/American deli clerk who said “mozzarelle” instead of “mozzarella” knew no different.  It was how his Mama and her Mama pronounced it, no vowel allowed;  it seemed a secret language belonging only to them.  Mortadella became mortadelle.  Drop those vowels unless you want everyone to know how Italian-ignorant you are, or so they made me believe.  I’d order the ham, spelled (and pronounced by me) c-a-p-i-c-o-l-a.


Gobagool .  Say it right, damn it!  You live in South Jersey, the land where a beautiful language has been purposely bastardized and it’s OK, It’s called evolution, an evolution  of the citizens’ free will, driven by ancestors who dropped a vowel – or two or three along their journey across the Atlantic Ocean or many years ago on the streets of New York City and Philly. No one is to blame, not the deli clerks and certainly not me.

Jersey means well.  The lack of vowels has never seemed to interfere with the beauty of the food. At Aversa's bakery and deli, the chicken parm is still fantastically yummy.